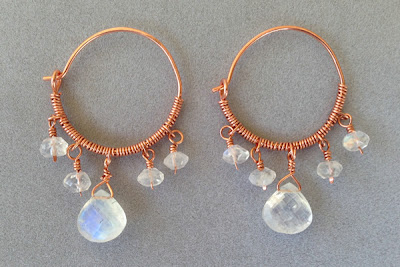 Finally set to making some jewelry last night.  I used some of the new moonstone rondelles I received yesterday along with some moonstone briollettes that I received from the same vendor in a previous order.  These earrings were relatively simple to make - especially considering that I am not a big fan of coiling wire.  Normally, I consider it very tedious.

Hmmm.  I was just looking for a picture of the gem order where I got those briolettes, and instead I found a blog post on different gemstone order that had smooth brios.  Now I'm thinking I should have used those ones, since they seem a little smaller - and I love the flash of smooth moonstone too.  I guess I'll try making another pair so I can compare the results.  This is a technique I would like to get better at.

I have two fundamental issues with this design.

First, I did all the coiling before I made the hoop shape - which is what made it reasonably easy to do.  But, after I made the hoop shape, the copper wire is still a little soft.  I hammered the top half so it is work hardened, but I couldn't do the bottom because of the loops where the stones hang.  I don't want them to get smooshed.  As I'm writing this, I think the solution is that I should have tumbled the hoops before I attached the stones - right?  That would have work hardened the entire hoop.  I guess I will definitely make another pair to try that out.

The second design issue may not be so much of an issue as a preference.  Should the brio face front or to the side?  In the picture, it appears as if it is facing to the side, but that is just because of how they are laying.  In fact, if the earrings were hanging, the brio faces front.  I think that is how it should be - since most people look at your earrings from the front framing your face, not the side - but it could be done either way.

In my head, I'm comparing this to putting in a new roll of toilet paper.  You can have the paper hang over the roll or under the roll - there's no right or wrong way, but people absolutely have a preference.  (In the realm of TMI - I'll switch it if it doesn't hang over the roll.  Gosh - I hope that's not just me!)
Posted by Lisa Yang Jewelry