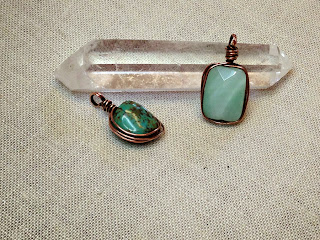 First off, I love Pinterest!  It started off slow for me, but as I've gradually added to my boards, I find it such a valuable resource for information and inspiration.  I don't know how I did without before.  It's so nice to have pictures and links to their sources available so easily and organized in one place.


I mention that because today's post comes from my Pinterest board of Free Jewelry Tutorials.  I have been trying to re-think old ways of doing things - and one of my favorite styles is a simple wire framed gemstone.  It's easy when you are making a link - the wire is even on each side, but when you are making a dangle, the wire starts from the bottom and typically ends at the top, resulting in one side with a thicker wire border.  You can see an example of this in my post of the Free Herringbone Wire Wrapped Tutorial - although the herringbone weave helps hide the difference.

Anyhow - one thing that seems so obvious, that I've never done before is to try putting two pieces of wire through the hole in the stone, as they did in this Free Tutorial for Wire Wrapped Stone Earrings. 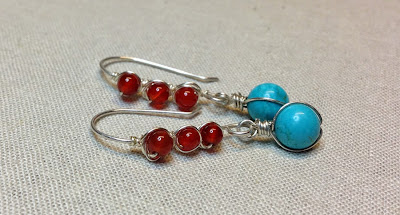 It's so simple that I had to try it.  Obviously, you need a stone with a slightly larger hole, but I think it works great.  I didn't think I would like the small indent where the wires go their separate ways - but it is barely noticeable when the jewelry is hanging (I purposely tried to show it in some of my photos). 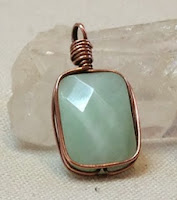 Once I try a new technique, I usually try to see how I can expand on the idea.  So, next, I tried making some pendants and giving them a thicker wire wrap (and hiding the indent) by wrapping around the stone a second time.   The picture shows the bottom two wires very clearly - but when the pendant is hanging, you don't see it at all - so this is a real winner to me.

I was worried the frame would come off the pendant sides, (and it could) but so far I don't see any problems with it.  It seems to work really well with irregular shaped stones, like the turquoise in the first picture. 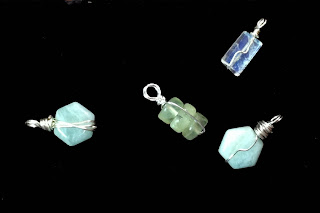 After a few successful pieces, I started searching through my bead soup to find other pieces to wrap and other ways to try this technique.  One other thing I've never tried is to wrap through the face of the stone instead of the sides.  I was pretty pleased with that too, although a single wire down the center was too simple for me, so I gave it a little twist with my round nose pliers to give it a curve.  I also tried wrapping a few times around the stone with a criss-cross.  Last, but not least, I tried a stack of stones using some lower quality prehnite.

Overall - I think this is such an easy technique for stones that two wires will fit through.  A couple of things I haven't tried yet - but it's next on my list - is to add some beads or coils to the wire that I'm wrapping around the stone.  I'll post those results soon - so stay tuned!
Posted by Lisa Yang Jewelry