Every once in a while, I like to take my jewelry making skills and super-size them to make other things around the home. Normally, I use macramé knots to make bracelets. But using the same square knots and half square knots and larger cord, it's super quick and easy to make macramé plant hangers and wall hangings. 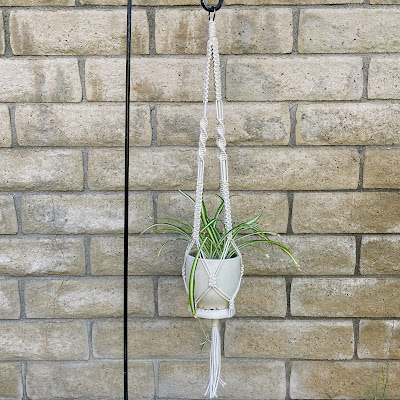 Here's my first plant hanger in quite a while and how to make it.

The best part about macramé plant hangers is that there are not a lot of materials to buy - or tools.

For the planter, I used 4 mm woven cotton cord in a bleached white color.  It's a natural strong rope, very smooth, not twisted.  I purchased it at the local craft stores - both Joann and Michaels carried similar cord under different names.  One store labeled the cord as 3mm, the other 4mm, but I think it was the exact same cord at both places. It's not a traditional macramé cord - which is usually twisted, but as long as you don't plan to separate the strands, I think this cord is fantastic. It's super easy to tie knots with, they stay tied, and I think it has a real polished finish.  Less rustic than jute and the twisted fiber cords - and sooooo much better than the braided polyester cords I learned macramé with.

I also used O rings that are typically used making purses - basically an extra large, heavy duty jump ring. The one I used has a 1 1/4 inch inner diameter in a gun metal color. 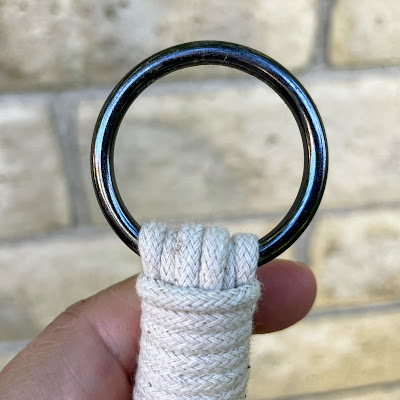 I got them at the local craft store, but I'll be buying them on Amazon next time - so many more choices. The ring is used to attached the cords and make it easy to hang. In a pinch, you could use the split ring from a key ring or a wood ring.  I prefer the metal ones since you can hang them from a smaller hook.

The only tool you need are scissors.

You may also want some large hole beads. Wooden beads are typically used - but I don't plan to limit myself to that. Too many other fun things you can use nowadays.  In general, a bead that can fit at least two or all four cords will work best.

I got a bag of the ones below. I'll eventually smooth out the holes with a Dremel or file and paint them or add polymer clay or beads to decorate them. BTW - these are not worth $20 or more. I bought them on sale with 60% off and they were still overpriced. Should have been a couple of dollars - but I had the need so... 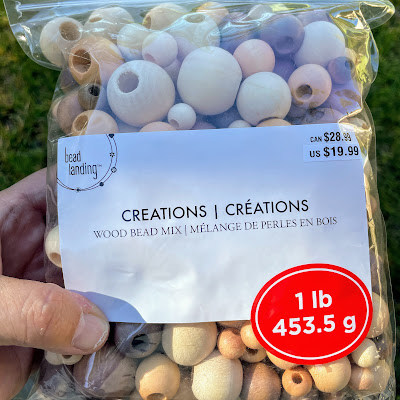 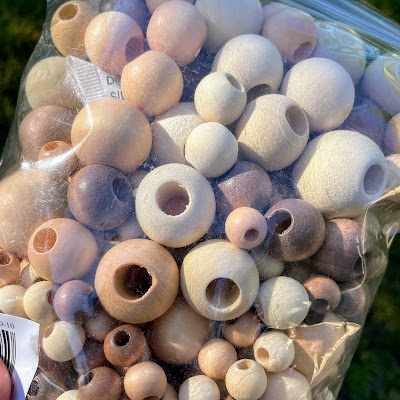 I didn't know how much cord I would need - so I'll tell you how I made it and what I'll do differently in the future to avoid wasting so much cord.  I have a habit of cutting my cords really close to the size I need and I didn't want to be short.  Cord is cheap - my time making this is precious so I wanted results the first time.

My finished macramé plant hanger is about 40 inches including the tassel - not including the ring which is just over an inch.  You should have an idea of how long you would like your plant hanger to be before you start, because you will adjust the number of knots you tie in each section to adjust the length.

Section by section - here are the knots and the detailed instructions: 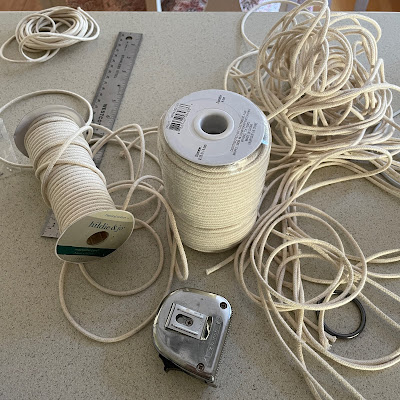 First, I cut 8 cords 24 feet in length.  I totally knew this is too much, but a little extra on the first one means I can adjust.  When the cords are folded through the ring, I ended up with 16 cords at 12 feet each. You use 4 cords for each macramé leg of the planter.  The two outer cords do all the work and technically need to be longer than the inner cords.  There are ways to swap the cords, but I didn't bother for this one. I wanted true measurements.

After I finished the plant hanger, I measured my cut offs and the true amount of cord used is:

Outer knotting cord: about 24 inches were trimmed from each cord meaning a little over 10 feet for each working cord should be good - or a total length of 20 feet before folding the cord in half.

Inner holding cord: about 90 inches were trimmed from each cord meaning I was over by 7 feet 6 inches on each side!  So, the inner cords could have been 10 feet long before folding the cord in half.  That makes sense because once folded in half they should only be a little longer than the total length of the plant hanger.

Note that cutting the cords different lengths makes organizing the cords a little more challenging since you have to make sure you divide and align them properly - but it will save a lot of cord (which is still cheap compared to your time and not having the project come out the way you want!)

Once the cords are cut, loop them through your ring and align them so the cord lengths are even on each side.

BTW - to make a plant hanger, I find it easiest to attach the ring to either a portable clothing rack (from IKEA is cheapest - but I got mine at Amazon due to pandemic). 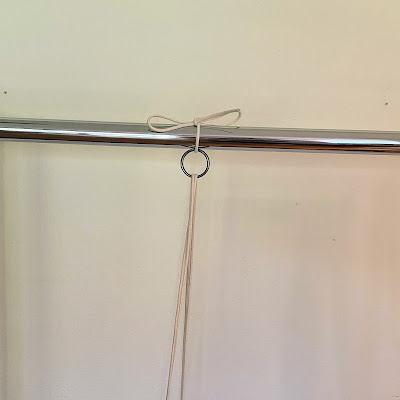 Or you can slip the ring on a hook mounted in the window and stand on a chair. Basically, the cords hanging down make life easier. The portable clothing rack is great because the height is adjustable - which means I can sit and watch TV. 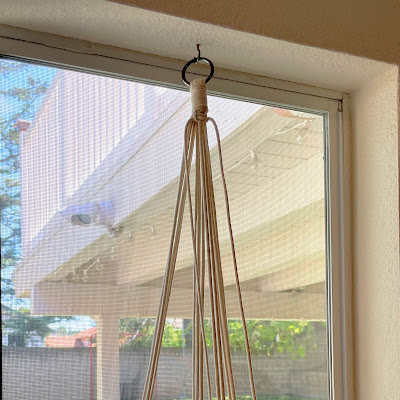 And now, let the macramé knotting begin!
If you would like to learn all about macramé knots and how to tie them, I highly recommend the book Macramé Pattern Book.  It has taught me so much about knots and patterns. It has a few nice projects I'll probably try too.
First, I used a wrapping knot to secure the cords.  It's wrapped about ten times. 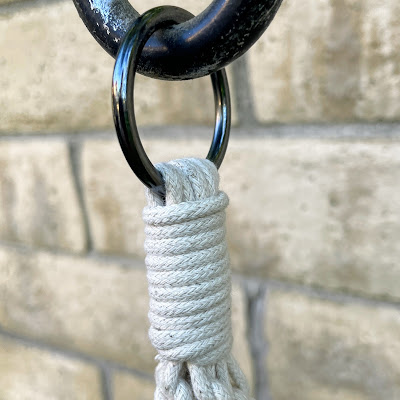 The next section it fifteen square knots.  You can count the knots by counting the cord bridge on the left side of each square knot.  Also, I try to make the lengths even, so sometimes I might have done one more or less knot. 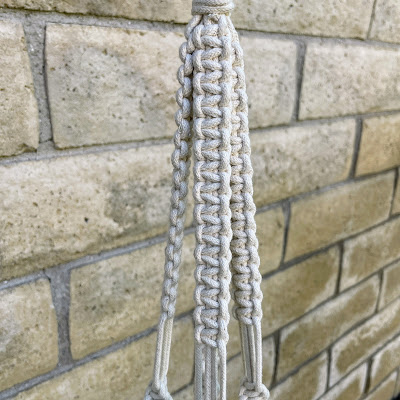 There is a two inch gap and then the next section is twenty half square knots. 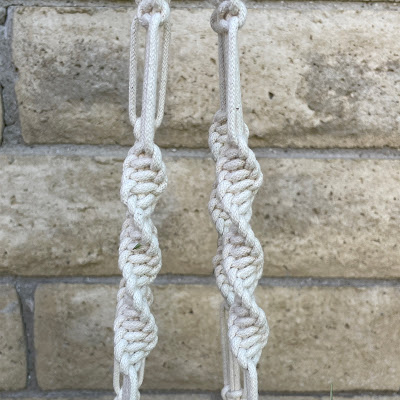 Another two inch break - and then another fifteen square knot section 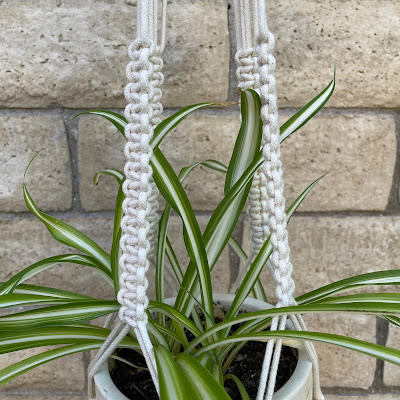 The basket is the most challenging knot tying - especially to get things even.  I dropped four inches, switched cords to use two from one leg of the plant hanger and two cords from the adjacent leg and tied three square knots.
Then the second part of the basket drops three more inches and switches to use two cords from each side again.  Even though I am using a relatively small pot, I am pretty sure those measurements will support a much larger (10-12 inch diameter?) planter. 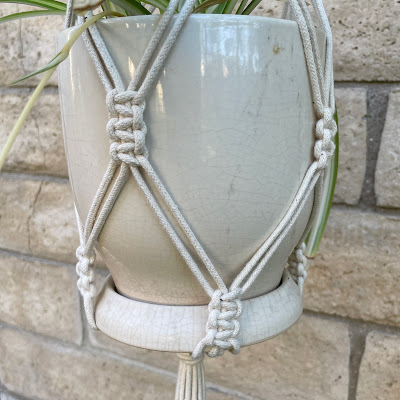 The last step is to drop down another three inches and tie another gathering knot.  Again, I did about ten wraps.
I cut the tassel cords to be eight inches long. 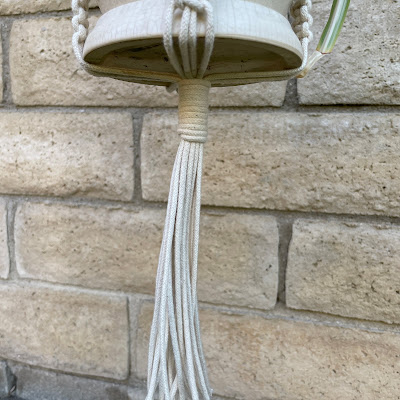 I'm sooooo happy with the results that I plan to make a few more.  I will probably add beads and make some other adjustments just to keep things interesting. 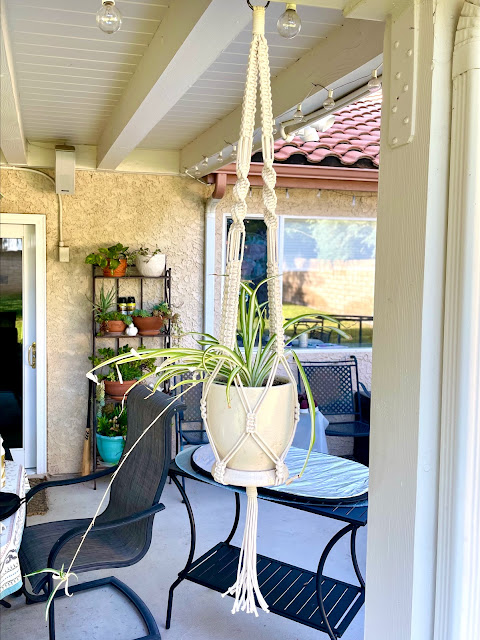 Did you like this project? Comment and let me know!
Would you like to know when I publish something new? You can be notified of new posts, projects and tutorials one of the following ways:
By providing your email, you will get notified of new blog posts plus special offers.
By liking my page on Facebook: Lisa Yang Jewelry on Facebook