Ah - this week brings me such a feeling of accomplishment.  I learned how to do something the right way that I had been doing wrong all my life.

I am talking about making beaded daisy chains, so the right and wrong classification is entirely subjective. But, I finally learned how to make the daisy chains using what I believe to be Native American beadwork techniques. And they are soooo much better. 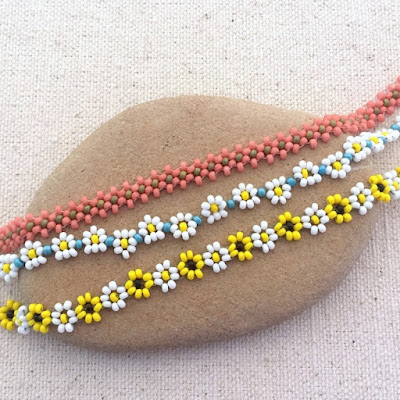 Shall we start with a quiz?  Which two chains are made using the new technique and which are my old way?

If you guessed the one in the middle is the type of daisy chain I've been making since I'm a kid, you would be correct. 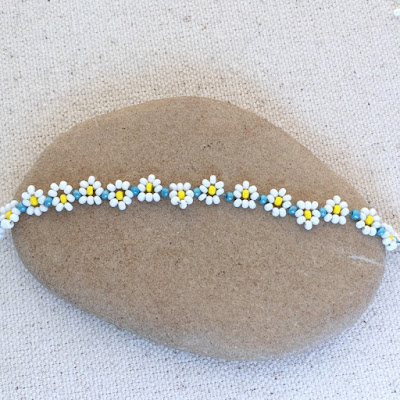 And I love this daisy chain!  But you can see that it doesn't lay flat, the daisies are crooked (which I always thought gave them a little character) but the biggest flaw is that they are hanging by a thread, literally.

As a little background, this story starts when I had to update a daisy chain making tutorial on the About.com beadwork site and the instructions there were new to me.  This isn't entirely unusual with daisy chains (or with the updates I need to make on the beadwork site) - I've seen people make them all different ways and they are often as wonky  precious as mine. 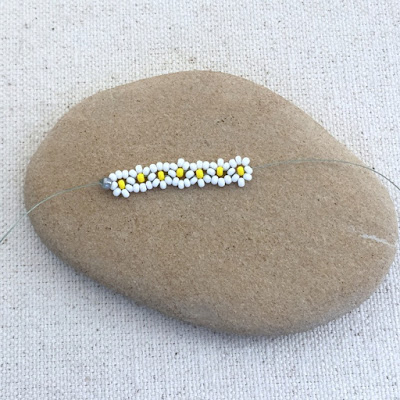 I think the original tutorial on the site roughly led me to the result above.  Which is cute, but has the same flaws as my daisies. They're crooked, and the connections between daisies aren't very secure, so the thread could easily break.

Now, this is where the perfect aligning of events happens.

I just so happened to have ordered a beading book from Amazon earlier in the week called Indian Bead-Weaving Patterns by Horace R Goodhue. Native American beadwork is a big search term for the beadwork site, so I figured I should know more about the topic anyway.  And the reviews on this book were very good.  But the reviews were a little different, so I knew the book would not be the same old, same old.

Little did I know that this wonderfully difficult to read book would hold all of the answers to beaded daisies and soooo much more.

This book is not everyone's cup of tea though. It is difficult to read the patterns at first and unlike any bead pattern book that you find on the market today. Reviewing the diagrams, I almost felt like someone was drawing the pattern designs for me with a stick in the dirt. (You did do that as a kid- right?)  Anyway, suffice it to say that they are that simplistic. But once you get the hang of it, it works.  And even more important, the book is written by someone who was passionate about learning the stitches and variations of Native American beading first hand.  And you feel it on every page.  It's very cool.

So, back to my daisy dilemma.  I did update the article using the white and yellow daisy chain pictured above, but I knew it couldn't be right. And it was nagging at me.

Luckily, the answer was in the book I just received in the mail.  By looking through all the variations, I was able to find the stitch that I felt the previous author was trying to show, as well as the stitch closest to the daisy I was taught when I was a child and had been practicing ever so confidently, yet incorrectly, all these years! 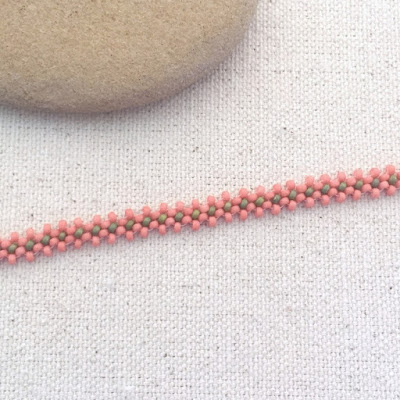 So, the floppy yellow and white daisies were transformed into this sturdy chain of interconnected daisies in coral and green. 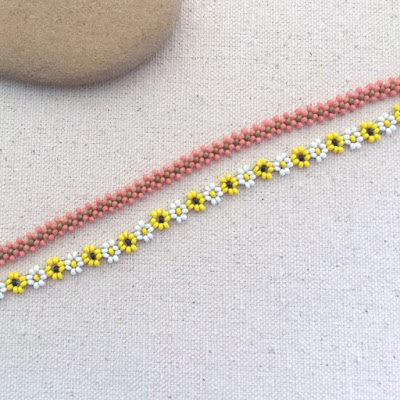 And my floppy hanging by a thread daisies became this pretty strand of connected traditional yellow and white daisies and black eyed susans.  And I feel so much better that the beadwork site finally has a really good tutorial of how to make Native American style daisy chains.
I've also  published a tutorial for the Daisy on a String variation of the daisy chain stitch.  This is the one that got me started with jewelry making when I was a kid, but it's fun at any age. 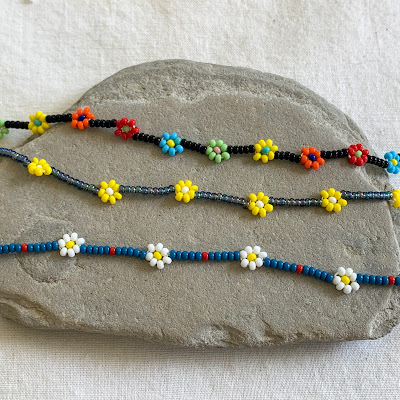 Should you be interested in the Indian Bead-Weaving Patterns book, but you are not sure it's for you, have a look at the diagram in the picture on the back cover.  That picture is a really good example of the types of diagrams used throughout the book.  There are a few black and white pictures of completed beadwork, and brief descriptions of many types of variations of stitches - making this one of the most comprehensive bead pattern books I've every had, but the diagrams are often done using text. To me, it was money well spent.

Oh, happy day!
If you'd like to keep up with my beading projects, please visit my social media account page to find out how to be notified of new articles and projects.
Posted by Lisa Yang Jewelry