Circular Netting Beadwork - The Basics and Beyond

I've been working on these little doo-dad mandala beaded charms for a month or so now.  I'm finally backtracking to publish some instructions though. These designs are where I started my exploration, but I was already familiar with the basics of circular netting. 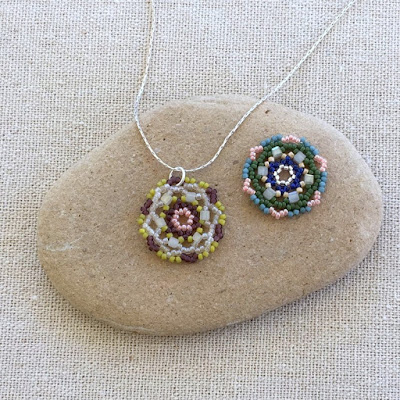 And even though I know the stitch pretty well, I still decided it would be useful to take a step back from the colors and fancy crystals to start with the basic circular design and try to evolve to the more complex designs like you see above.

I think netting stitch is best compared to, or should be considered as a variation of, peyote stitch. It is the same basic idea of picking up a bead, skipping one or more beads and stitching through the next bead.

For circular netting, that process occurs in a circle, which means each round of beads must either have larger beads or an increase in the number of beads from the prior round in order to keep the work flat.

A funny story - while I was deciding to start from the beginning, I had a beading magazine on my table that just happened to be flipped to the stitch reference section. I decided I would follow that little blip of instructions for circular netting. 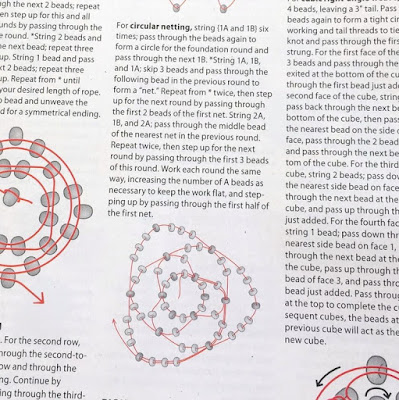 Unfortunately, they are incorrect!

After the second round, it became apparent that this would never lay flat without showing a ton of thread between the beads. I suspected it was wrong, because of the fundamental rule of circular stitches that you need to either increase the size of the beads or add more beads in each round to keep it flat. 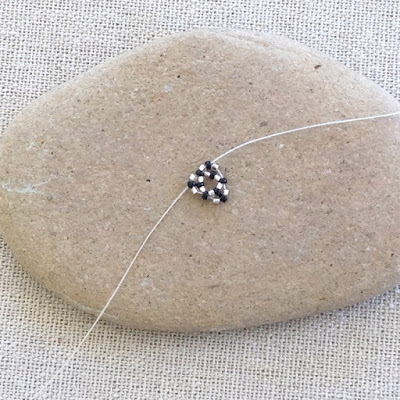 By the way, saying it's a rule - I just made that up, but it is true. And another lesson here is that even though you are following what you think is a trusted source, sometimes, it isn't you making the error, it's the trusted source.

In any event, I did follow the suggested color pattern from the bead mag instructions (which I love!)- and am correcting the instructions here. I also let the magazine know so they will hopefully correct it.

To begin circular netting, pick up twelve beads, alternating colors. I am using size 15 Miyuki seed beads - oddly my new favorite - in silver lined light blush and black.  You don't need to use size 15 beads - size 11 will work great. Your finished round will just be larger - but you will retain your eyesight and sanity longer than me.

I am using a little over one arm's length of Nymo thread, size D in tan from the cone. I never use those bobbins. The thread is totally different than the thread on the cone and even though the colors are delicious, it's a waste of time and money to try and use them. For me, at least. Also, tulip needles are my favorite. I rarely use any others. I have been waxing the thread using beeswax for these, but I don't think it's required. I think it may help stiffen them a little.

Leave about a six inch tail. Put your needle back through all twelve beads a second time and then go through the first bead again. 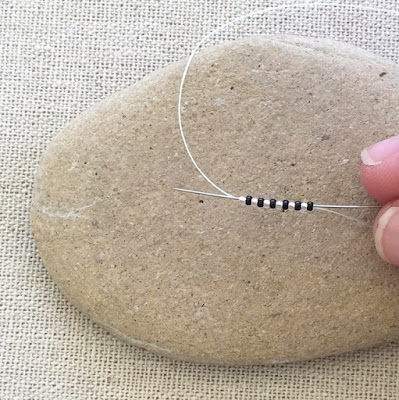 Pull the thread tight to make the beads form a circle.  Pick up three more beads, alternating colors. Skip a bead on the circle and stitch through the next bead. If you are stitching into a black bead, the black bead should be a center bead on the three you pick up - or vice versa. 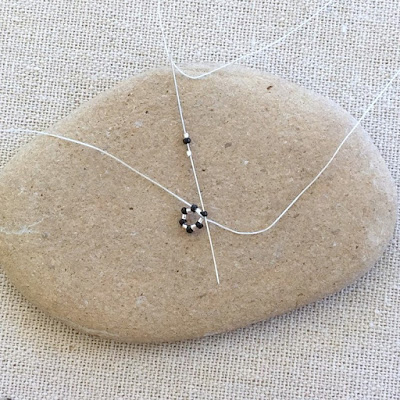 Pick up another three beads in the same pattern, skip a bead on the circle and stitch into the next bead. Pause to admire the cat shape (head and ears). 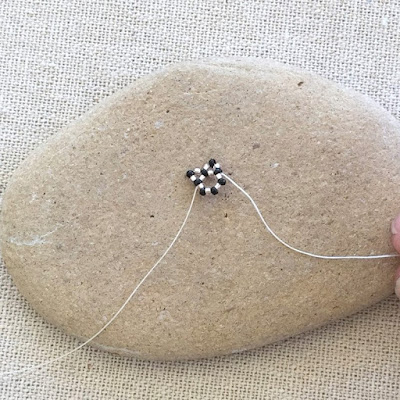 Repeat until you have done this around the entire circle. It should look like the picture below. 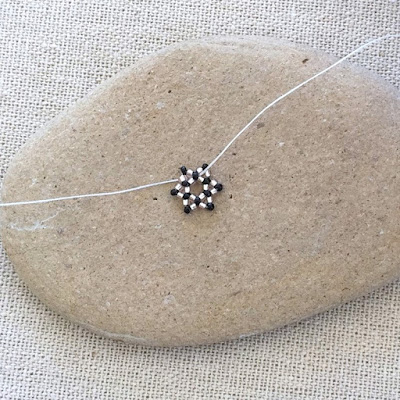 Step up to start the next round by stitching through the first two beads you added on this round.

Before continuing, you may want to adjust your beads to make sure they are laying like the picture. You can put your needle into the black beads and pull them slightly so they point out. It just makes like easier since you will be stitching into them for this next round. 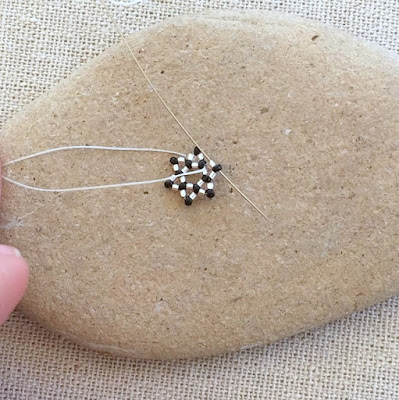 For this next round, you will follow a similar process of picking up beads, skipping beads and stitching through a bead from the prior round. But, as per my rule, you will increase the number of beads and pick up five beads for each stitch in this round and skip three beads before stitching into the next bead.

I picked up two light blush, one black and two more light blush beads, skip three beads and stitch into the next black bead. It is very conveniently sticking out waiting for you to stitch through it. 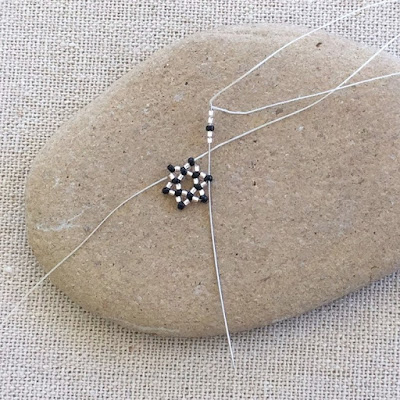 Repeat this process of picking up five beads, skipping three beads and stitching through the out-y bead until you have gone all the way around the circle.  Pass your needle back through the first three beads you added to the round to step up and put your needle in position for the next round. 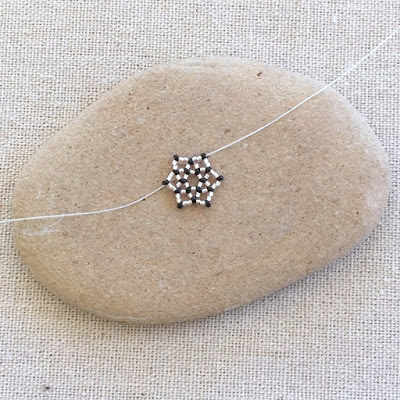 This time, pick up seven beads for the stitch, three of the first color, one of the second color and another three of the first color. Skip five beads and stitch into the black bead that is sticking out begging for you to stitch through it. OK - maybe I exagerrate a little, but it is easy to tell which bead you should stitch through with this pattern. 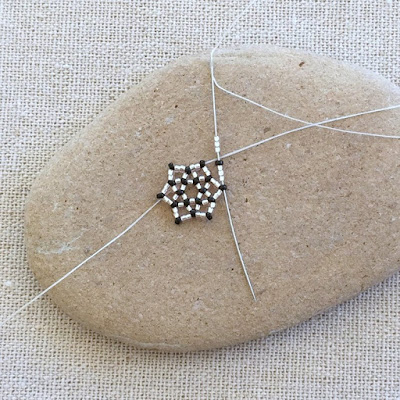 Repeat for the entire round and step up to prepare for the next round. The picture below is the last stitch of the round, plus the step up, which requires stitching through the black bead from this round and the first four beads that were added to start the round. 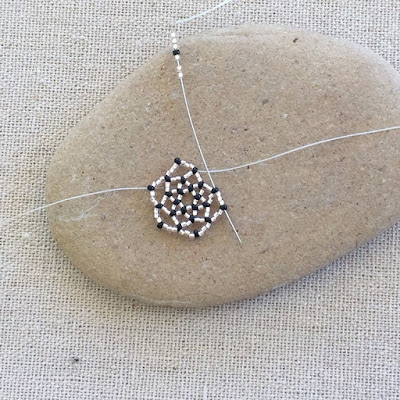 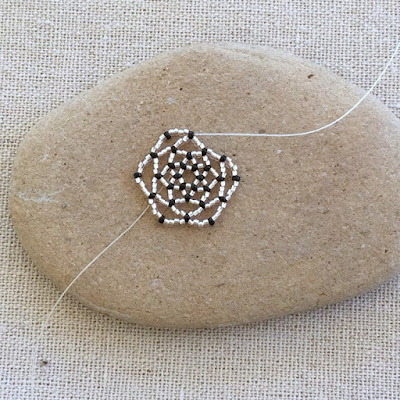 Considering this is a very basic pattern, I really love the way it looks. A bit like a spider web, but still very cool. After this round is when I called it quits.

To finish, I stitched back through all of the beads on the outter round, at least once, maybe twice.  This helps stiffen the outter edge and keep it from curling or bending.  It also makes it easy to end the thread because the thread is tight in the bead holes and I don't need to tie any knots. I just trim the outside thread close to a bead. 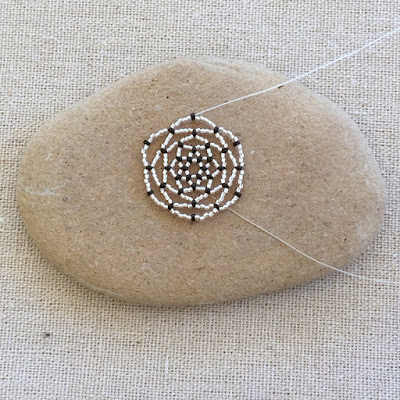 To finish the tail, thread your needle on the tail thread and go back through the first circle one or two more times.  How many times you go around depends on how hard it is to pull the thread through and how much thread you have left. Going through at least one more time and then cutting the thread should be enough to hold everything in place.

After cutting off the threads, I decided to try the pattern a second time, with transparent cobalt blue beads and 3mm black swarovski crystals in the last few rounds. 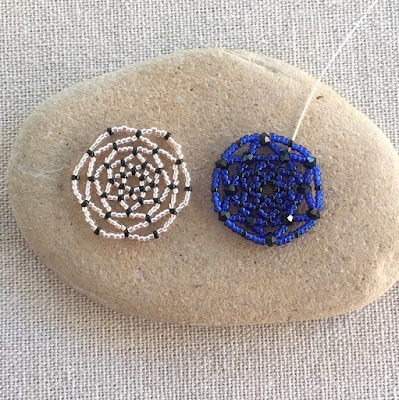 The blue is a bit dark in photos, but looks better in the light.

Since the crystals are larger than the size 15 beads, when I started adding them, I added two less size 15 beads so the round did not get too loose. If you look in detail, you'll see that round 3 (not counting the circle base) has five size 15 beads and round 4 also has five beads, 2 size 15, a 3 mm crystal and 2 more size 15 beads.

So the number of beads didn't increase, but the size of at least one of the beads did (Lisa's rule of circular netting). 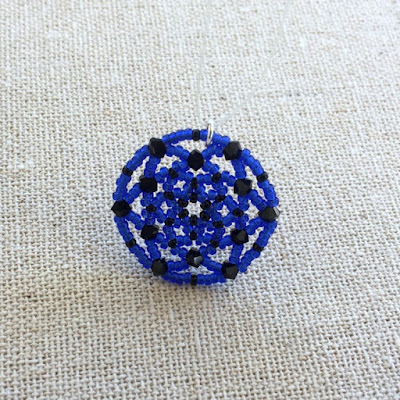 Hopefully, this will get you started with circular netting.  Once you get the hang of netting, you can vary the number of beads you add on a round, the size and shape of the beads and also how many you skip between each stitch.  Here are some other examples that I've played with. 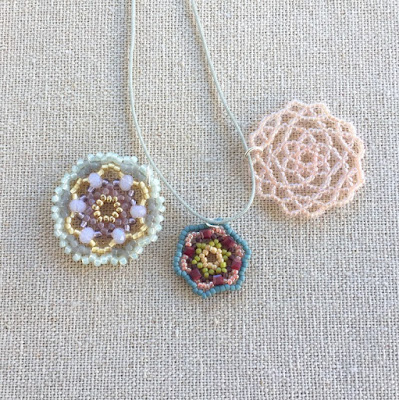 Who knows, maybe I'll add a video of this too.  I am enjoying making them.  I will post instructions for some of the other variations soon.

You can keep up with my latest posts by following me on social media or signing up for emails. Sign up here.
Posted by Lisa Yang Jewelry