This one makes me a little sad.  I was very pleased with my results from the Free Tutorial for Wire Wrap Framed Gemstones that I must have forgotten my skills.

You see, I'm not very fond of coiling wire and I don't think I'm very good at weaving it either.  I'm not sure whether I'm not patient enough, precise enough, or I just don't find the zen in the technique.  It's just me, so I rarely do projects that involve coiling or weaving.

But, I really liked these earrings from my Free Jewelry Tutorials Pinterest board.  It seemed like the next logical progression from my simple wire frame pendants.  Wow - was I wrong.

First - the tutorial is a pictorial only.  Which makes it look easy, but you have to figure out the materials for yourself.  For those of you who feel you are up to making these earrings, here's what I found worked.

All is well so far.  The frame was fairly simple.  There were a few tricks to make it even on both sides though.  I wanted the frames to be about 1 1/2" long, so before I wrapped the frame wires up around the bead, I used Sharpie to make a mark at the 2 inch spot.  This let me know where to make the wrap and loop for the top without guessing. 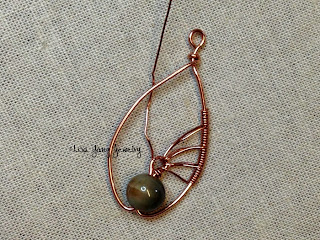 But then came the coiling - which is where the tutorial just doesn't give enough details.  It was coming out 'OK', even though I could tell it wasn't the same as the tutorial - BUT then I ran out of coiling wire... and it was tedious and hard and I wanted an easier way. (Yes, I am whining just thinking about it!)  I always think I can find a better way of making something - so that's what I tried next.  I think a normal person would have added a new wire and called it a day.

I made another frame and decided instead of coiling on the frame, I would make two 1 inch coils and slide them onto the frame.  Time savings - phenomenal!  I think I'm a genius about now. 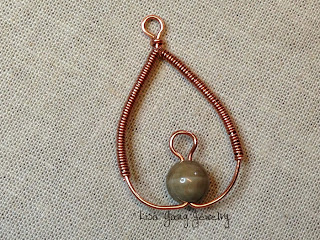 Now, I try to do the weaving.  Ugh!  It's still tedious and now the problem is that the higher I get up the frame, the wire keeps slipping off the coils because of the angle.  The little light bulb goes off above my head again, and I decide I'll weave with macrame cord instead.  It looks really pretty in a neutral green that matches the ceramic bead - but slipping is still a problem.  I almost resorted to crazy glue because I really wanted to get these done!!

What I should have done is separate the coils a little to make room for the wire or cord, but I was already out of patience and didn't want to ruin the frame.  So, that's as far as I got with these earrings.

Of course, like everything else I do, I look at them today and think - eh, not so bad.  I'll probably try the weaving method I started in the first picture again - but with much more wire.  I'll also mark the spots where I want the wraps to go to the center so I can make them even without counting coils.

The second frame took so much less time than the first, I consider it a far better technique once I can resolve how to make the wires or cord stay on the coil.  I've thought about using pieces of coil instead of one long one, which would give me a natural break to wrap between.  It would also resolve how to space the wraps to the center.

In any event, if you have advice - please let me know.  I'll probably let these sit until next week while I consider my options.