Comparing the 1-Step Looper and Round Nose Pliers


I love getting new tools - especially one that could potentially replace the use of so many other tools - like the Beadsmith 1-Step Looper Pliers .

OK - so it's not exactly a brand new tool on the market.  It came out a couple of years ago and it was so hot for a while it was really hard to get your hands on one. The reviews I initially heard weren't very good. But now that demand has settled and they are in stock - I decided it was time for me to get one. 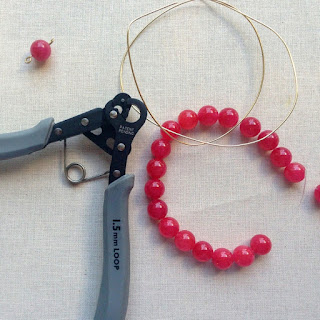 My approach for this, is to do a direct comparison of making a simple loop wire bracelet using the standard wire jewelry making tools and one using the 1 step looper. In case you are wondering - I purchased the tool - it was not provided by Beadsmith.

One more thing I should tell you - I hate making simple loops. I find them much more time consuming to make than wrapped loops and I think they are less secure. So, there's a slight bias towards not liking simple loops before I start this process.


You probably know by now, that I like to be slightly methodical about these things, so I decided to use ten 10mm jade beads, a piece of 12 inches of 20g wire as the basic materials - and then the necessary tools. I used my phone to time how long it took to complete 10 links going at what I thought is a standard pace - not rushing - just making some links.

If you'd like to see the 1 step looper step by step process for making the bracelet, it is on the beadwork.about.com page. And one thing you may like at beadwork.about.com that is new - is you can now see my step by step  projects on one page instead of having to scroll through a slide show. Yay!  Look for the link that says Show All. 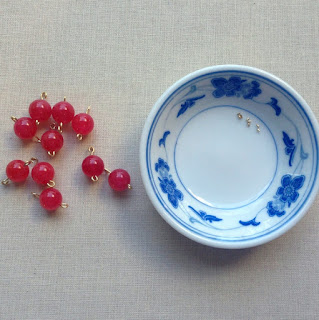 These are the links I made with the 1 step looper and the scrap wire produced by the process.  OK - I might have missed a few little wire ends - but the point is - there's not much scrap produced by the process if you take the time to understand how the tool works - i.e. find the cut off point for the wire and push your wire just past it.

As for time, it took about 7 minutes and only one tool to make these links. I didn't fix the loops, straighten them etc. - this is how they come off the 1 step looper. 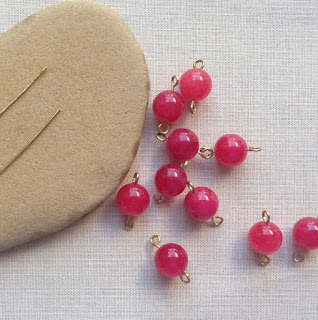 Here's the second batch.  From a process perspective, this was a little more involved.  First, I unwound one of the looper made links to see how long the wire needs to be.  That's the crumpled wire up top.  The time to do this was not included in my link making time.

Now, I started the clock.  I cut 10 pieces of wire to the right size for making the links. I made sure to flush cut each end of the wire like I normally would - but did not file the end.

Put down the wire cutters, pick up the round nose pliers.

Make an eye loop, add a bead, then make the second eye loop - 1 link done. I repeated this process and it only took slightly longer than with the 1 step looper.  About 7.5 minutes.  Not bad - but I am pretty experienced with wire work. 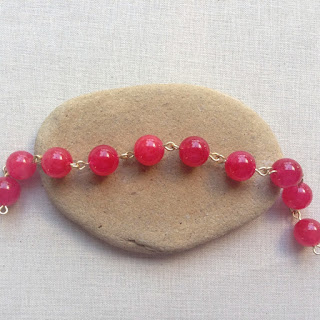 Ta da... Now I've used a total of 15 mins to make my beaded chain. Above is the 1 step looper chain. 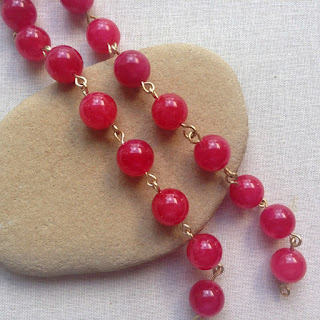 The chain made using multiple tools takes less adjustment and less time to put together and is done in just under 12 minutes.  Depends on how you look at things - 3 minutes doesn't seem like a big difference but turns out that it is actually 25% faster to do it the multiple tool method. When you look at it that way - big difference.

Ah - but I just realized I forgot to include the time it took to figure out the size of the wire I needed - which is probably about 3 minutes.  So - it's probably a wash from a time perspective.

Another BUT - it was much more pleasant, easier on my hands and just overall felt better to use the one step looper. And I like the results a little better.  The loops are more even, the beads are more evenly distributed on the wire - i.e. no long wire necks. 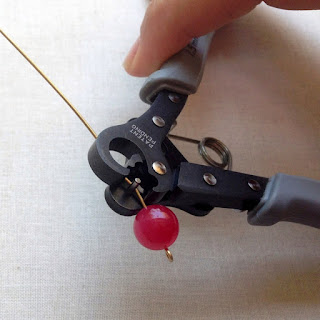 I think there are some keys to getting good results with this tool that I haven't seen mentioned - and it may be why some people don't like it. 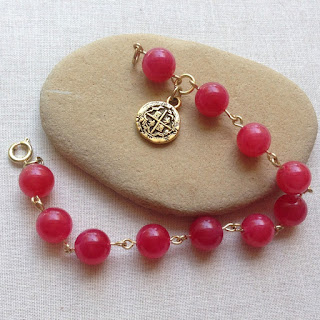 I didn't time the process of adding a charm or clasp.  Those steps are the same regardless.

My first impressions - I really like the 1-Step Looper .  I plan to make a couple of more projects with different beads, try some different wire sizes (it says you can use 18-24g) and I hate to admit it, I also want to buy the 1-Step BIG Looper - but not because I prefer larger loops - just because I like tools.

I am wear-testing the bracelet to see how long it will take before the loops bend or something breaks. To be fair, I should probably complete and wear both bracelets - and maybe I will if I don't look like a total dork wearing two of the same thing.

Note to self - use different colored beads next time so this isn't an issue.

There's lots of ways to keep up with my free jewelry making projects. Here's a list: