This is a new spiral wire ring design for me. I have made spiral wire rings before, but this one is slightly different - one that I like a bit better for a number of reasons. 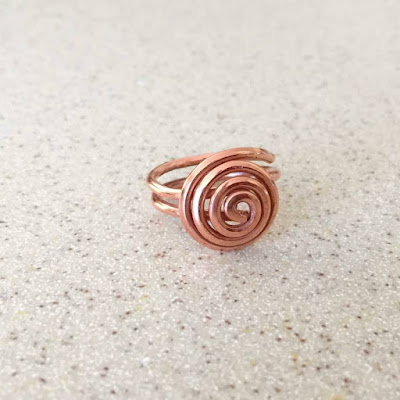 First, the ring is larger and more substantial than the others I've made. This is due to using a thicker (smaller gauge) wire. I also like the ring band, which has no extra wraps or fuss, is more comfortable to wear. Last, the domed top allowed me to dust off another tool I haven't used in a while, and that's always a good thing!  Here's how I made it.

I started with a piece of 14g copper wire. I think you'll need around 8-10 inches for a ring, depending on the size of your spiral and ring, of course.  The picture below gives you an idea of the size of my spiral. 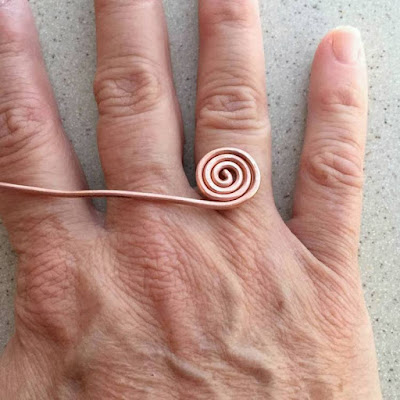 This ring is made with hardware store electric wire - the kind that comes with about 20 strands of several different gauges wrapped around each other in a plastic sheath. Ages ago I bought this type of wire because it was economical (cheap).

It is also a real pain to strip and separate and use - mainly because after all of the stripping and separating, the wire is so work hardened that then it needs to be annealed and pickled and straightened.  If you can get this wire from someone in construction for free, it's worth it. Otherwise, I think buying fresh wire in the size you need is worth the extra expense.

I made a short video on how I anneal wire. I will do a future post on the details for that.

Start by filing one end and making a flat spiral. There's a post that shows how OCD I can be about things at the link. (Is it a spiral or a swirl - lol. You'll have to read it to understand. It's cringe-worthy, humorous and helpful, all at the same time) 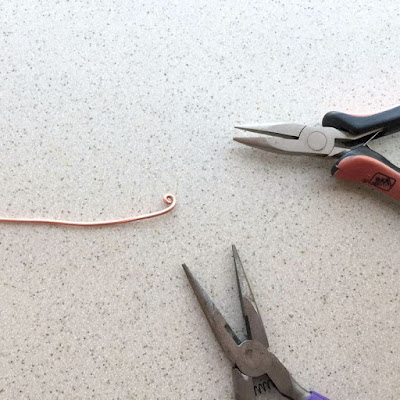 You can check the size against your finger as I've done above. To make the domed top, you will need a doming block and punch set. These come in metal or wood - I'm not sure if the wood one would hold up though. I don't use my dapping set enough and so I'm happy to dust it off. 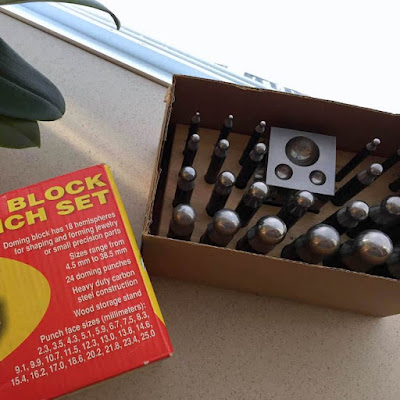 To be honest, I have no clue how you are supposed to use this tool to dome something. I've made it up as I go along, and it works, so I'll consider it intuitive to use.  Here's how I did it.

Find a dome that is larger than you would like yours to be - and a dapper that matches the size of your spiral.  You don't want a dapper that matches the size of the dome or will flatten and harden the wire that you will be using for the ring band. The goal is to gradually dome the top. Use your hammer to whack the dapper until the wire starts doming.

The newspaper helps keep the noise down and keep my counters from getting dented by the edges of the steel block. 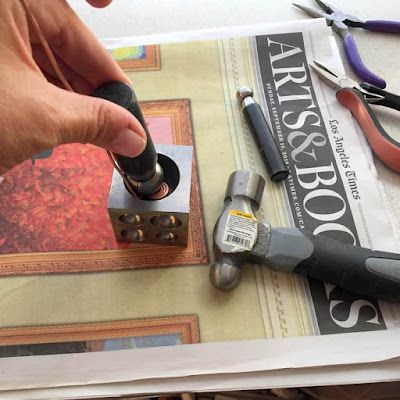 Gradually move to smaller sized domes, and repeat the whacking step. Note - don't use your wire shaping (ball peen) hammer, use a hardware hammer. I use the small one picture above. 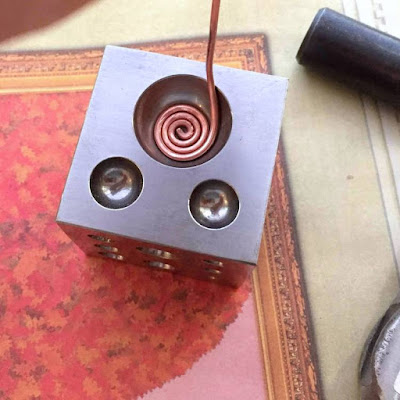 As you are moving to the smaller domes and dapping punches, your dome will gradually be getting deeper, rounder and more even. 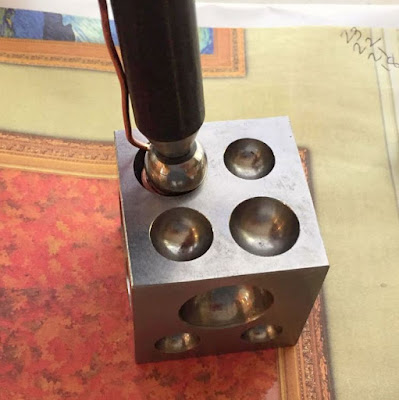 When you're satisfied, put away the doming block and dappers and it's time to move on.  This is what mine looked like after doming. I did my best to keep the wire out of the way of the dapper so it won't get hardened from the dapping. 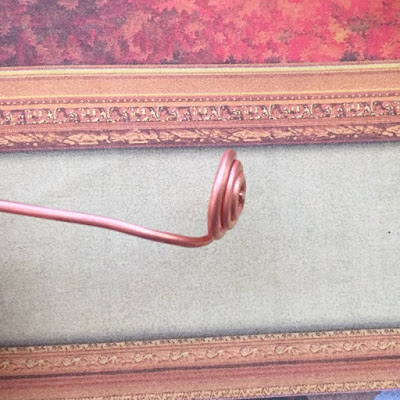 Now to make the ring - which is a bit tricky. For this, you will need a metal ring mandrel or something else sturdy to wrap around. I suppose you could use multi-step pliers if the barrel is the right size, but that's probably not going to work for most people.  If you're going to make rings frequently, just buy a nice heavy duty ring mandrel. It's a tool I use all the time.

I started by curving the wire slightly before placing it one the mandrel. I just found it easier to get the shape started, rather than having it slide around on the steel. 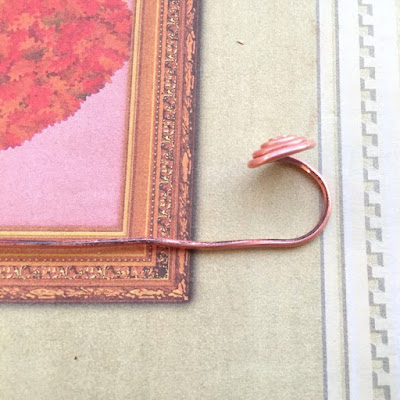 Once I had the shape started, I found a spot slightly smaller than my ring size and wrapped there.  I wrapped around twice and then flipped the ring over to wrap a third time.  If you don't flip it over, the wraps are going to be different sizes because the mandrel is tapered. 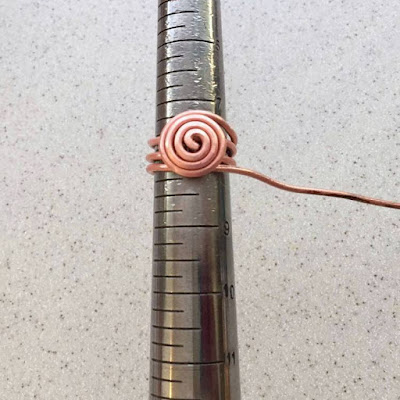 Here's the side view. I did three wraps on the mandrel, but eventually ended up cutting off one coil of the ring because I thought the band was too thick. You can decide how many you like. 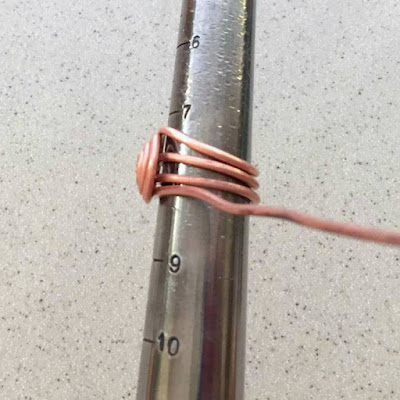 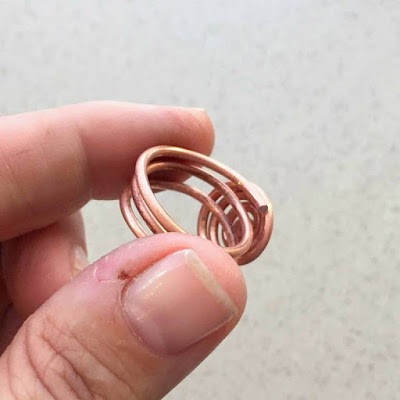 And here is what it looks like after I've decided to trim one round from the band. The size just seems more appropriate to me. 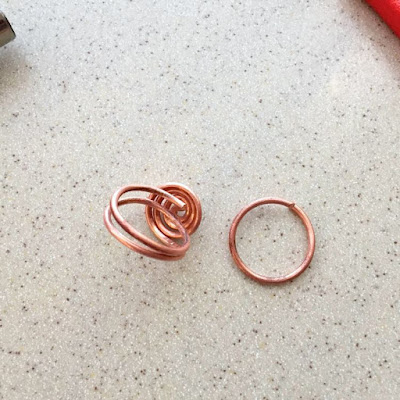 Use a file to smooth the cut edge. You may need to gently pull it from the dome - like you would open a jump ring - by easing it to the side. 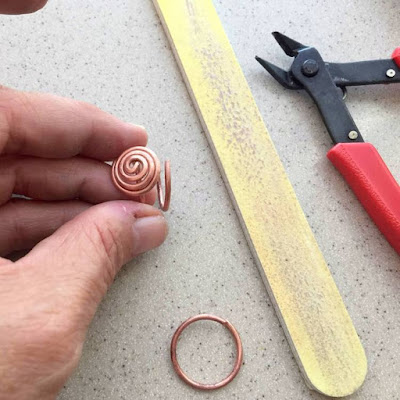 Use the ring mandrel to adjust the size. It is always easier to make a ring larger than to make it smaller. 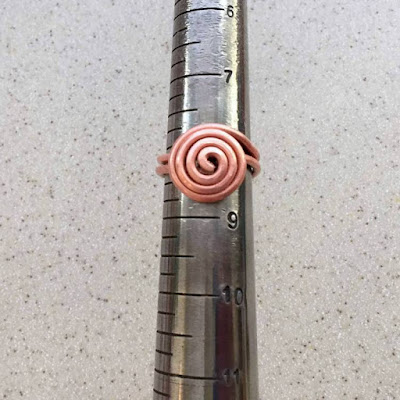 The final step is tumbling and polishing. I think I'll do posts on annealing and tumbling separately. They are important steps and deserve separate attention.They are also easy, but require some special tools (doesn't everything!!).

Here's the inside/back of my ring after tumbling. You might enjoy watching this video of me opening the tumbler to retrieve the ring(s). 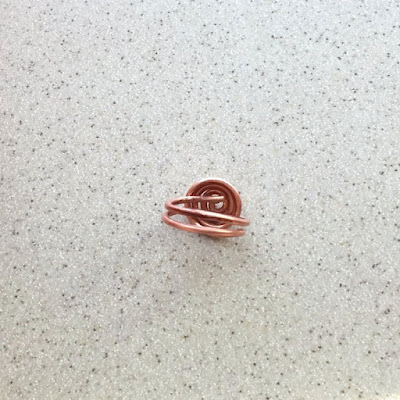 And the front - along with another variation - a hammered flat spiral.  That was fun to make too. Let me know if you'd like a separate tutorial for that one. I have requests to make a couple more, so it is possible. 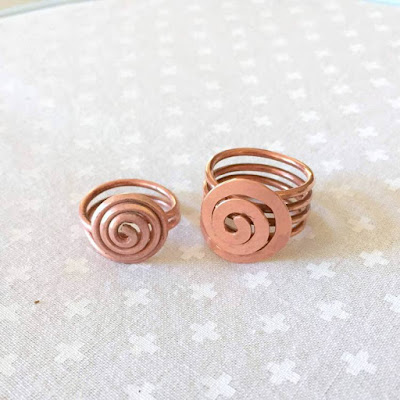 And here's a peek at all of the spiral rings I've made recently. As well as that little piece that I cut off of this domed spiral ring. I flatted the ends on my steel bench block to make a little ring. Heck - why not? I may smooth the ends a little more or wire on some beads, or maybe I'll just leave it. Not everything has to be perfect. (haha, just kidding says the OCD part of me). 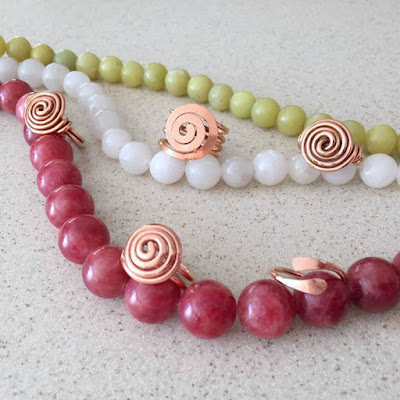 And here's the video of me opening the tumbler, in case you didn't feel like clicking on the link above.

I've decided to stop letting the great overlord google ding me for having repetitive sections on my blog posts. If you interested in being notified when I publish a new tutorial or seeing what I'm making, please click here for a list of my social media accounts - including how you can be notified of new posts to this site via email.