This project replicates the business card symbols from the Squid Game series on Netflix in beaded peyote strip that is suitable as a ring, bracelet or anything else you might like to make. 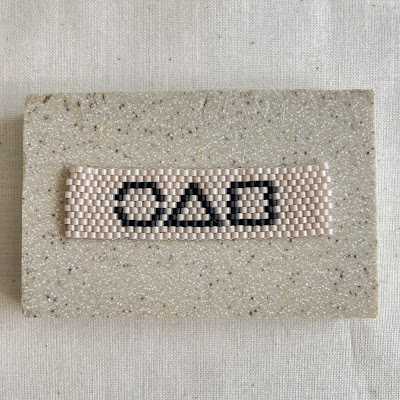 I tried it several different ways and have included the bead diagram and word diagram below - as well as some instructions and my variations.

In keeping with a Squid Game theme of childhood memories and games, this post should really be called Squid Game meets Goldilocks and the Three Bears.  This is the story of making three different versions of a Squid Game themed odd count peyote beaded bands - one that is probably too big, one that might be too little and a third (and fourth) that seems just right.

But it's also a bit about experimentation with peyote stitch - a few tricks I haven't  tried before, like switching to a 3-drop stitch in the middle to try and achieve a better design.

First, you might wonder why make this at all.  If you've seen the show, it's pretty awesome and has fans out the wazoo.  Mostly though, I really liked the graphic aspect of the card and thought it would translate well to beadwork. If you haven't seen it, it is a circle, triangle then a square.

The first beaded design I made is the 11 bead wide band. I really wanted to get a true circle and square, so that's when I moved to a smaller design. Also, even though I love wide band rings, the design gets cut off in between your fingers. Soooo, then I tried the smaller design.

This is the Goldilocks part, where the first one was too big and the next one is just too small. In making this one, I also took the liberty of experimenting with the square design. Look closely to see if you see the difference. 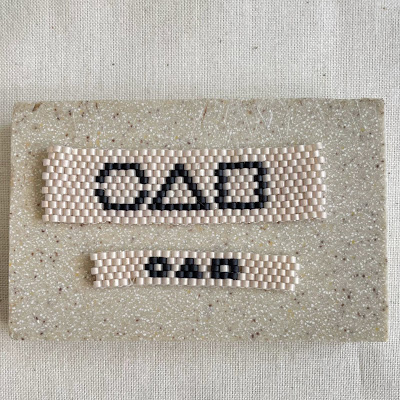 To make a square, I skipped a bead in the middle on the row before the square starts and then I used a 3-drop peyote stitch for the entire square. It left a small gap on the sides of the square, but it did give true straight sides for the shape. I probably would have finished this into a ring, except somehow I broke a bead on the edge and I didn't feel like making a repair. There is a one half bead space on either side of the center of the square.

That takes me to the two rings that seem just right - at least in size. I finished both of these into rings.

The top ring is traditional odd count peyote.  The bottom ring is where I experimented some more by using 5-drop (is that even a thing?!) for the circle and square. 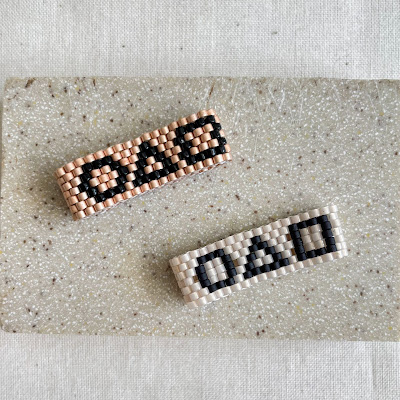 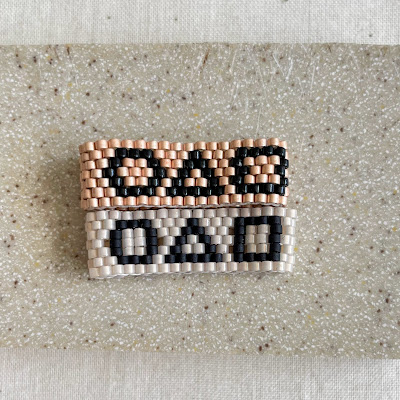 I didn't take in-process photos. If you are interested in making your own Squid Game ring, the bead chart and word chart are below. If you need step by step instructions on making an odd count peyote ring, click the link for a tutorial. The instructions are the same, except for this band you will start with seven beads instead of nine for the cross ring.
From a materials perspective, I used 6 lb FireLine in Crystal. The bead legend is not quite accurate to the rings. The top ring uses size 11 delica DB-1152 Galvanized Frosted Champagne background with DB-0010 Opaque Black for the shapes.
All of the other rings in this post use size 11 Delica in Silver Lined Blush DB-1452 and DB-310 Matte Black. 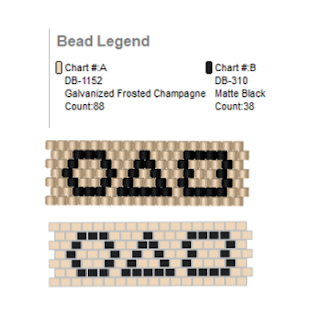