At a beading play date earlier this year, my friend mentioned that there is a serious lack of jewelry that represents Judaism - especially at holiday time. I pretty much promised myself that I would make some designs to make up for that. 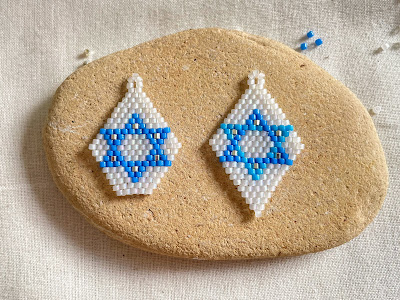 This is the first one, a Star of David pattern done in brick stitch.

However, I have seen some examples of hexagrams that outline only the outside shape of the star - and it just looks like a six pointed star, not a symbol of Judaism, so I think this design has some flexibility.

I made two separate star designs. I have been trying out new (to me) bead design software called Beadographer to design these. It has a free option, but the paid version is only $6.99 per year, so I splurged. Previously, I was using BeadTool 4, which I still like, but I just wanted to try something else.

The first design is a brick stitch diamond shape with a two tone blue star. The two tone part was a little trickier to bead than I thought it would be, so that led me to try a second version. I also wasn't thrilled with the diamond shape, but I like it more now than when I originally made it. 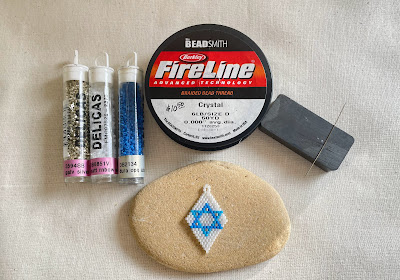 I used 6 lb FireLine in Crystal and the bead colors are duracoat opaque azure blue (DB2134), opaque capri (DB0659), matte rainbow white (DB0851V), and galvanized silver cut (3594SB).
Here is the brick stitch bead pattern.  The pattern does not include the hanging loop at the top. I use a five bead loop for that. 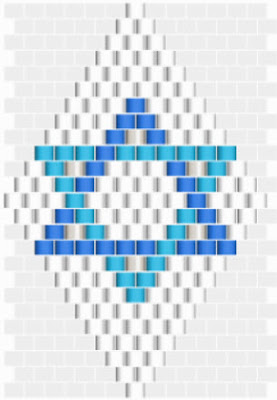 The second version uses the same colors minus the DB0659. 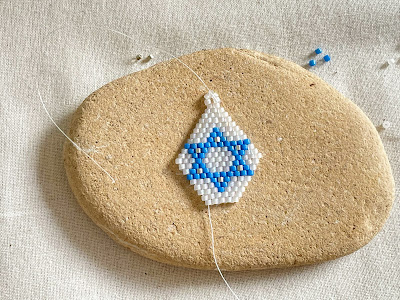 I mentioned in a previous article about jewelry maker's holiday gift ideas that I was reading a couple of Margie Deeb's books on beadwork design.
I feel like my color choices have improved a bit thanks to the chapter on color in The Beader's Guide to Jewelry Design and the information in the The Beader's Guide to Color. I previously skimmed over the color concepts of hue, value and intensity - but now that I've tried absorbing the information I'm finding color selection a little easier, and it looks a bit better.
Or I could've just gotten lucky. That happens too.
Here is the bead diagram for the second version.  this one includes the five bead hanging loop at the top. 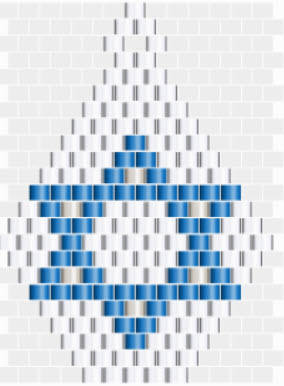 The point cut off the diamond shape at the bottom might seem a little random, but I remember liking the design at that stage when beading the first design.
If you ever wonder how long it takes to bead something, this single earring (or pendant?) took me about 45 minutes.
Another thing I love about this design is the silver cut beads. They are so sparkly! Even though there are only six of the beads in the points of the star, they really add to the design.
A new trick I've learned is to use bee's wax on my FireLine. It seems strange because FireLine doesn't really need wax, but I've found it is useful to 'stick' the two sides of the thread coming through the needle together. I've noticed less tangles and easier stitching. Goes to show that you never stop learning if you keep trying new things.
I wax the thread after I've threaded the needle and am ready to start stitching. I wax starting at the needle and pull the thread through the wax bar to the end.
A few in-process stitching photos because I liked these shapes and designs. This is just after completing the first point of the star. 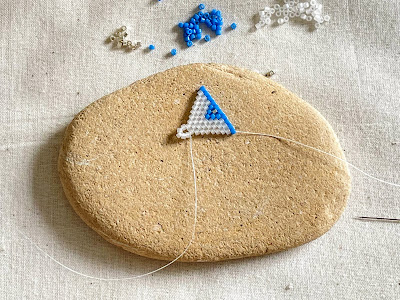 This is a few rows later.  It's a pretty cool geometric design that could be used in a fringe earring. 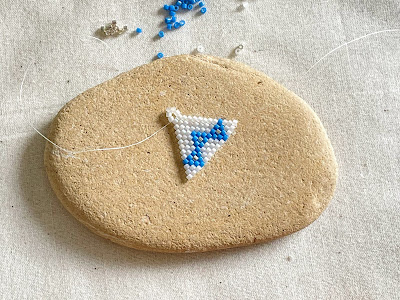 I hope you found this project helpful and will consider sharing it with a friend who might enjoy making it OR make some jewelry for someone like my friend who has trouble finding Judaism oriented jewelry.
If you enjoy my articles and projects, please follow me on social media or subscribe to get email notifications of updates.
Please subscribe if you'd like to be notified of future posts. Enjoy!
By email: Subscribe to Lisa Yang Jewelry by Email  Make sure you confirm your request by replying to the email.
By liking my page on Facebook: Lisa Yang Jewelry on Facebook

By following me on Pinterest: Lisa Yang Jewelry on Pinterest
By subscribing on YouTube:  Lisa Yang Jewelry on YouTube
And Instagram: @lisayangjewelry
Supposedly, google is doing away with their email notifications in the near future. When that happens, I will move to sending periodic newsletters. You can sign up for those by providing your email, you will get notified of new blog posts plus special offers.
Posted by Lisa Yang