Today, a piece of jewelry pulled from the pile by a friend, shined up, given a little re-work and sent to a new home.

But along with it are the lessons learned from the time I made it, to when I finally finished it, at least 2 years, maybe much more. 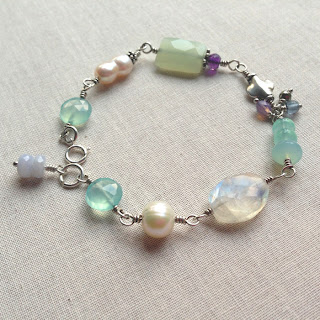 The changes I made were so small, but made a huge difference - especially since it went from the UFO (unfinished objects) pile to sold in a matter of minutes.  Here's what's different...


Previously it had a small, non-decorative sterling hook.  You may think - why is a plain lobster claw clasp any better?

It's more secure and less obtrusive.  And, connected to it's similarly styled ring, looks more like a piece of chain (i.e. part of the bracelet) than a clasp. 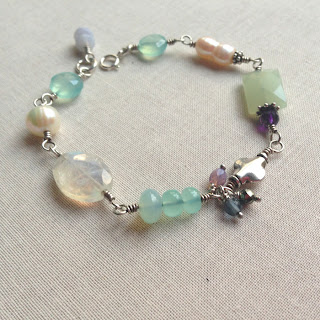 See that small group of three dangles on headpins next to the silver bead.  Those - and the dangle at the clasp - are new additions and changed the bracelet from flat and boring to interesting.

I know it's hard to believe, but it's true.  Without that little bunch of beads, the silver bead stuck out like a sore thumb and the entire bracelet was flat.

There was always a weight at the clasp, but it was a large - at least 12mm - faceted amethyst.  Who wants to rest their arm on that rock all day?!

In the revised version, the clasp dangles are the perfect counterweight to the gemstone group on the front - which means the bracelet really swirls around your wrist with no top or bottom. 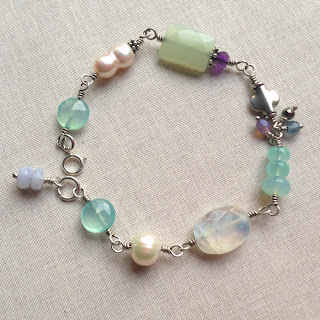 And last, but by no means least, I made the bracelet a little larger when I added the new clasp.  Because each gemstone section is fairly large and rigid, the original size had the bracelet bending around the wrist.  Very unflattering.

Enlarged by less than 1/2 inch, the bracelet twirls and flows around the wrist showing off all the beachy goodness of the gems.

In case you're wondering, the gemstones are aqua and lt. blue chalcedony, single and double pearls, a yummy rainbow moonstone with incredible blue flash, green serpentine, dark amethyst, blue lace agate, and the dangle cluster is glass beads and pyrite - all wrapped in sterling silver wire.

Do you ever pull things from the UFO pile and re-work them?  Funny how a fresh perspective can make all the difference.

Look for something similar to show up in my Etsy shop soon. (probably on my wrist too!)