When something catches my interest, I generally have to try it a couple (or more) different ways before I decide what I like best.

And so it is with looming.

Immediately after finishing my first bracelet on the Ricks bead loom, I warped it up to make another bracelet of the same design.  You'd think I'd be a little more adventurous, but I'm not. 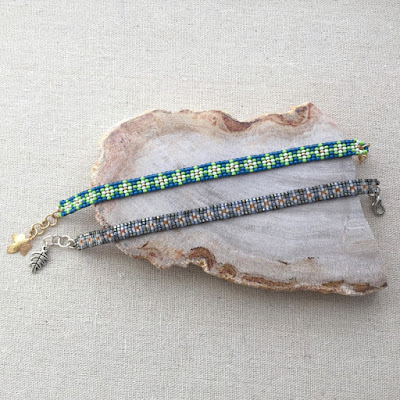 Well, not entirely true - I did plan on changing things, but the pattern, width, and length aren't the parts that needed changing.  It was the beads.

I knew right away that my color choices on the first bracelet weren't quite right, but it was more than that.  It was also the shape and size of the beads that weren't thrilling me.

I thought that cylinder beads were the natural choice for looming because of their consistent size and shape - but it still felt like it was missing something.

This time, I went with Czech Preciosa size 11 seed beads. 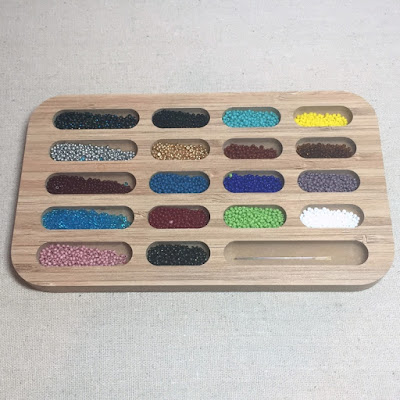 I started off by emptying out my travel bead board and adding a variety of Czech beads - mostly matte opaque colors since the last bracelet didn't have enough color differentiation.

Remember how much I loved this traveling bead case from my last post?  Well, I still love it when it is filled with the right beads.  When you have to switch the beads, not so much.  It needs to come with a scoop.  I think I'll stop at the local 7-11 today for some Slurpee straws.  That will probably do the trick.

Here's my looming in progress.  I'm happy with the colors and the beads right away.  I'd be happier with my pictures if the sun would start shining again.  Daylight light bulbs just aren't the same as the Southern California sunshine. 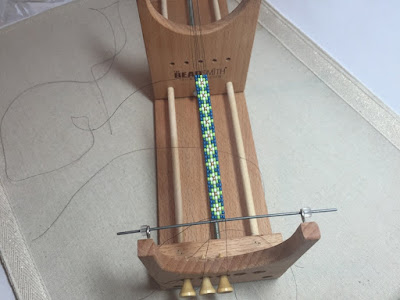 I love the depth of color, and also the shape of the beads.  Reminds me of more traditional Native American style loomed beadwork.

This time I had some good and not so good experiences with my Ricks loom.  I love the magnet that is at the back to hold my needle. 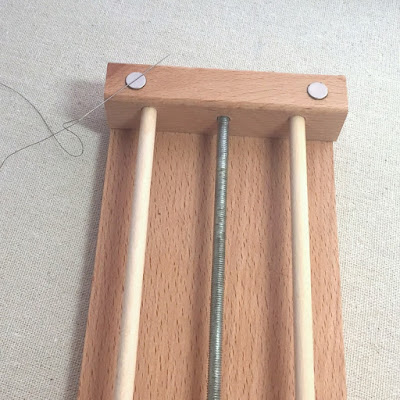 What a fabulous idea!  I used it throughout the project whenever I had to step away.

On the not so good side, I had some minor issues with uneven tension of the warp threads. 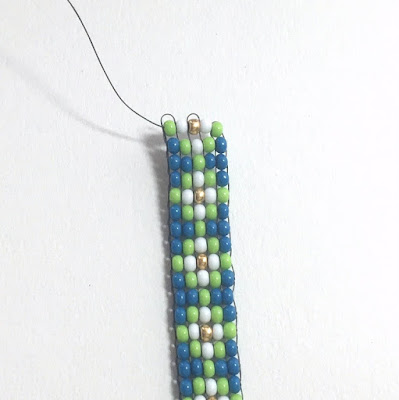 I noticed it most when I was getting to the end of the bracelet.  The picture above is after I removed the bracelet from the warp bar and squeezed in a last row of beads. 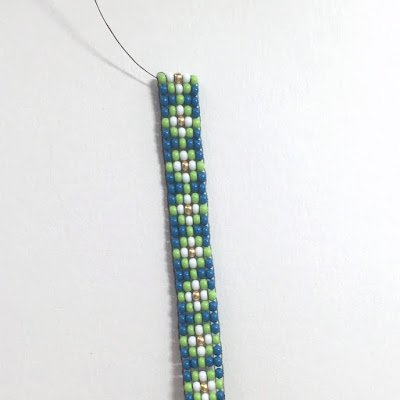 I did manage to smooth it out and distribute the difference over the length of the bracelet, but I suspect it could be a lot worse if I had more warp threads in my bracelet.  It will definitely be something that I look out for in the future.

Even though there are only four threads to weave in, it is still the part that I hate most.  That, and figuring out the clasp situation. 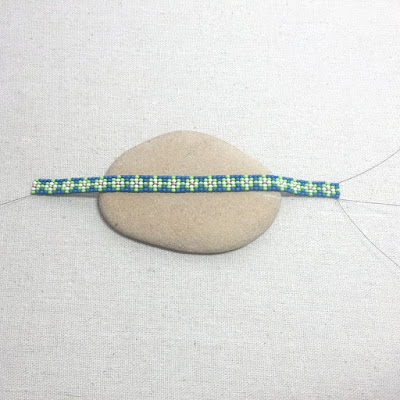 My last idea to just use bead loops to add the clasp worked fine, and I even got some compliments for it on the Ricks Loomatiks Facebook page, so I decided to finish this bracelet similarly. 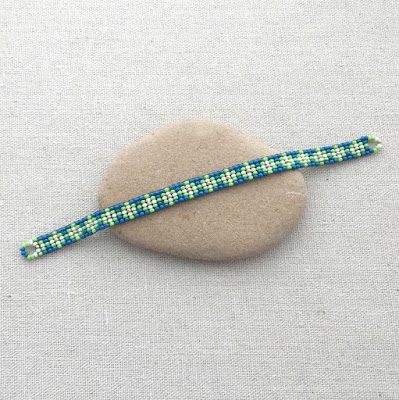 The loops are a little larger than the last one and I tried to keep the colors of the bracelet going in them - but it's still just a loop to attach the clasp using jump rings.

I added another leaf charm on the extender side of the clasp again too. 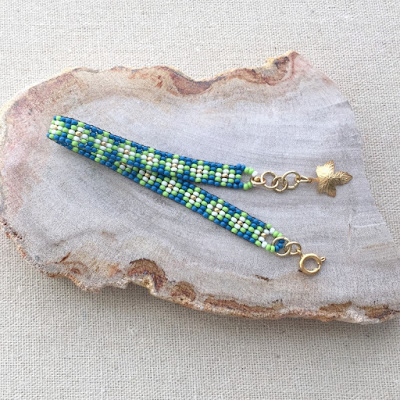 But I didn't like this leaf and ended up changing it for a longer, more feathery version. 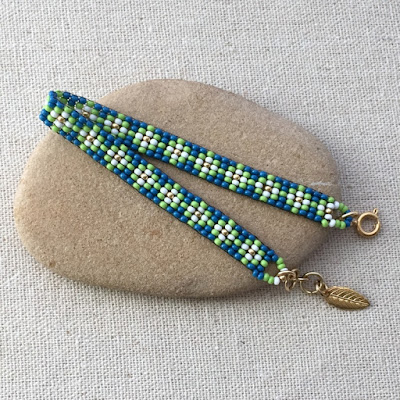 In other progress, I warped my Little Ricky loom for a design that I made using the BeadTool 4 software.  I thought it would be a great way for me to try working with more warp threads but I ran into a problem.

After making this bracelet, I decided I prefer Czech beads, but the design I made is for size 11 cylinder beads.  Since you can't change the project size on a Ricks loom, I'm all warped and my design is going to be too large for the loom setup.  The design was for a loomed bracelet centerpiece, not a full bracelet so I can't really make adjustments to make this work.

The Mirrix loom is warped and ready to go again, this time for 4 bracelets.  I like that you can warp it for multiple projects at once.
The Jewel Loom is also ready for a leather edged loom beaded bracelet.  I'm not sure if I'll use crystals or seed beads this time though.  Decisions, decisions...  I'll have to take some pictures of this setup - since I don't think I have yet.  Of course, the loom isn't really meant to be warped with leather, but I've come up with a way to do it that I like - probably better than doing it on the Mirrix loom.

One thing that I hate to admit is that I am feeling a bit discouraged by my lack of knowledge and experience looming.  I am trying to push through it, but there is so much to plan out!  That's part of the reason why I am not changing up the design too much.  Too many other things to learn and catch up on.  (For someone who's feeling discouraged, you've got to admit, I really commit on the tools and supplies part...)