Are you my Mother?

Do you remember that book - Are You My Mother?   It was one of my favorites. About a confused baby bird looking for his mother. 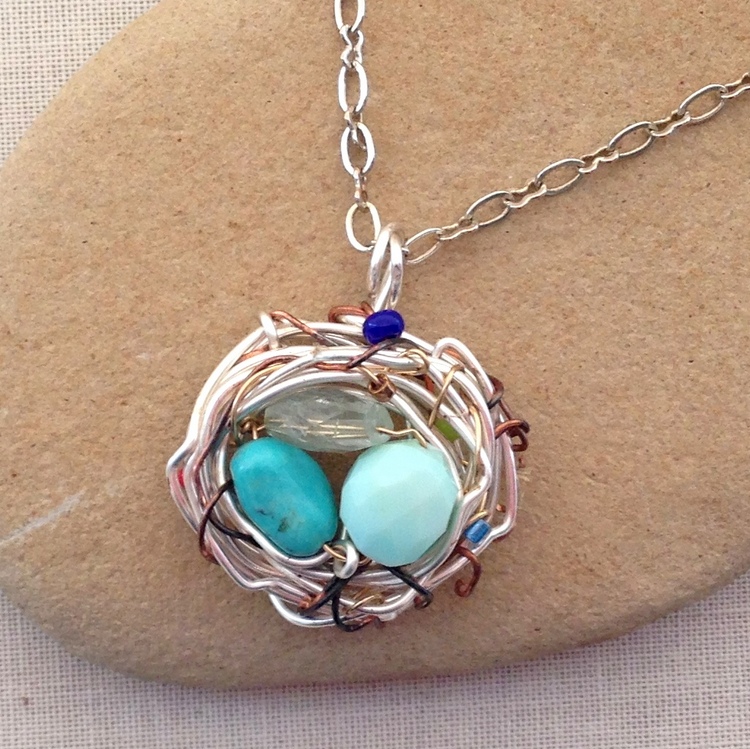 Here's my Mother's Nest - with birthstones for March (Aquamarine), October (Opal) and December (Turquoise).  Lots of blue.  I wish I had some appropriate Pink Peruvian opal since the pink would have been a nice contract - and the October birthday is for a girl - but I don't.

I tried to make my nest a little different than most of the ones I've seen.  Did you notice?

It's messy - like a real nest. I didn't want a perfect swirl.

I wanted something that was a jewelry representation of the nest that is sitting under the eaves of my deck right now - a mass of different twigs and leaves and goodies. I tried to get a picture of that nest - but so far, no luck. 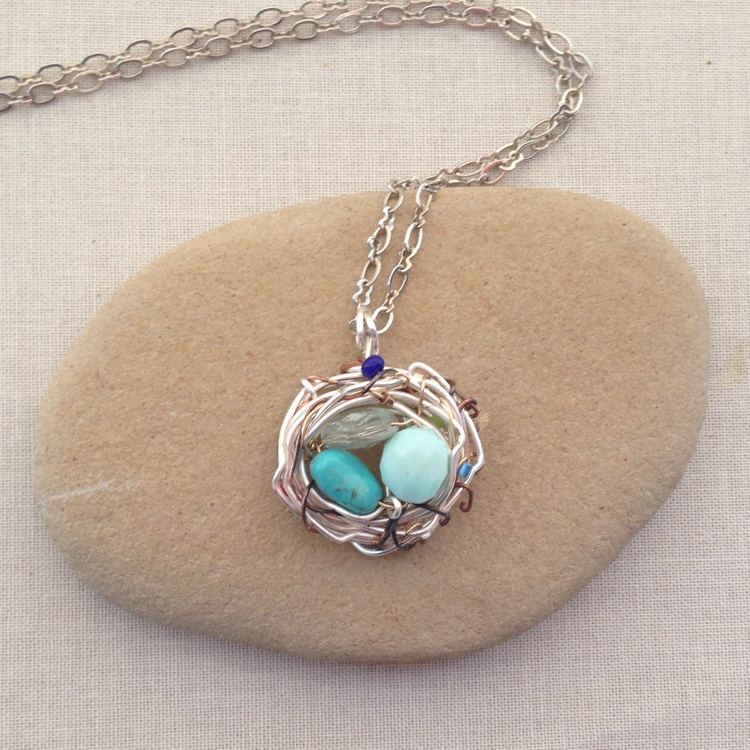 So, my nest is a mass of wire, beads and a tiny little bit of fiber.

I found this free DIY Bird's Nest Necklace tutorial by Sarah Ortega to get started. She has those lovely, neat, swirly, totally unrealistic looking nests that I envy - just like I envy people who have super-neat homes. They're nice but totally impractical for me.

So look at her tutorial and if you're the fastidous type - just go for it. 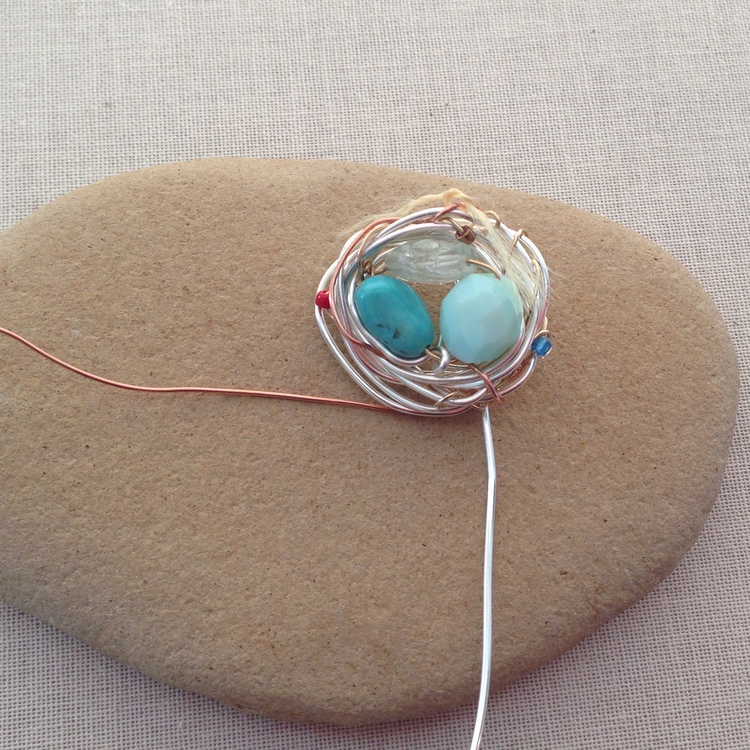 If you're more like me, and would like your nest to reveal the true nature of your being, as well as commemorate the reason for the mess (your children), you might want to wire your first circle of beads on some contrasting wire.  I used a scrap piece of 26 g gold filled wire.

Then as I swirled my main nest wire - made from Beadalon 20-Gauge Artistic Wire , I added some stray beads and tried to kink the wire here and there and generally be messier than I ever am while working with wire. It's hard to be purposefully messy. Pretty easy when I'm not trying though. Go figure.

As my nest grew, I added a messy double loop to hang the pendant. I also added some more scrap wire - this time copper with an occasional bead here and there. I tried not to overdo the extra bits and baubles. 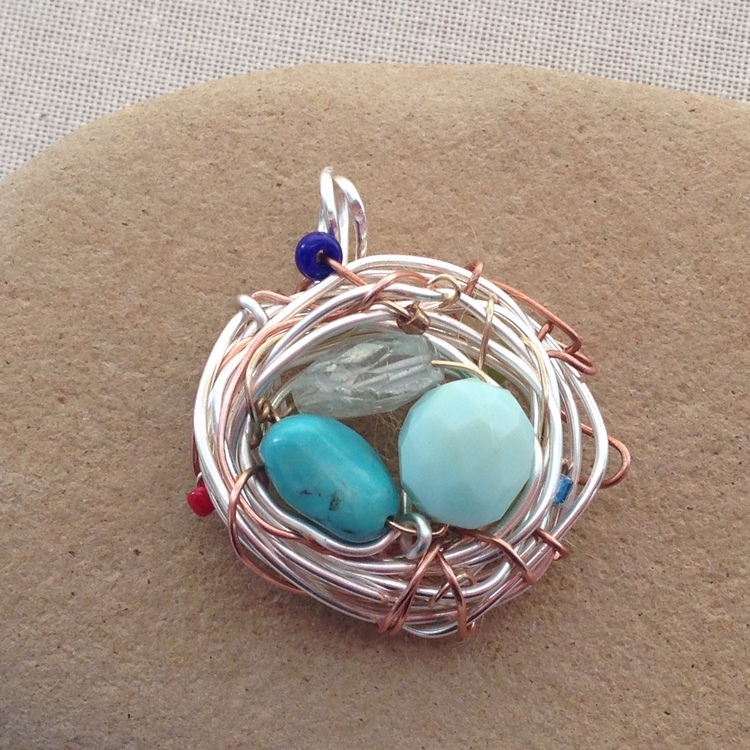 As final steps, I took my round nose pliers and twisted the wire here and there to add some more bends and knots. I also added some Liver of Sulfur Patina to oxidize the copper wire and add some contrast.

Having never used Artistic Wire before, I wasn't sure if it would oxidize or not.  It doesn't. I guess when it says Anti-Tarnish on the package that should have been a hint. My bad for not reading carefully. I probably would have liked to patina the silver and brush the highlights, but I'm good with it like this too. 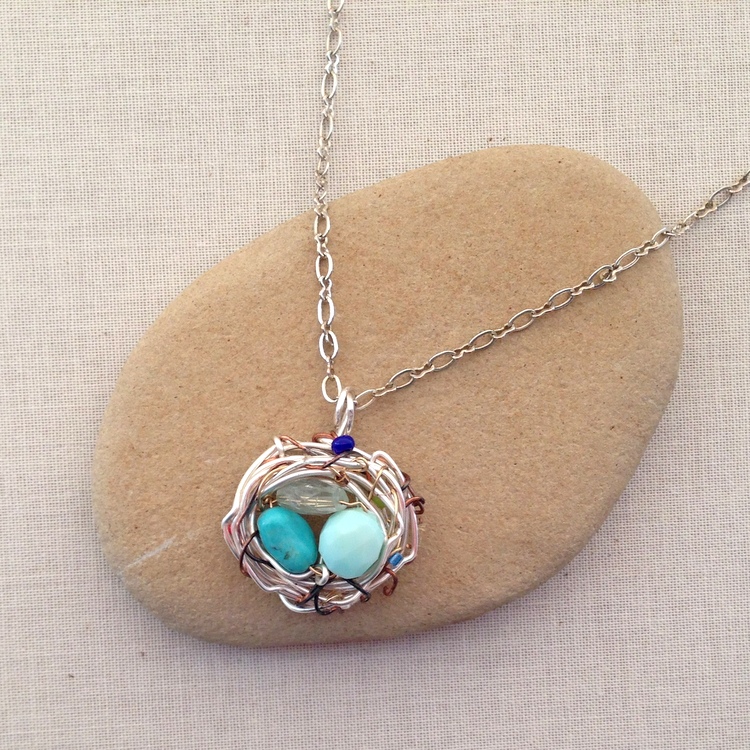 I have a couple of other Mother's Day projects on my to-do list. I'm hoping I'll get them all done before the big day - cause you know I'll be sitting back with a Mimosa and a couple of Minions waiting on me on the happy day.

I hope that you will follow my jewelry making in one way or another - both here and at beadwork.about.com.

Here's all the ways you can get notified of my new projects and posts: